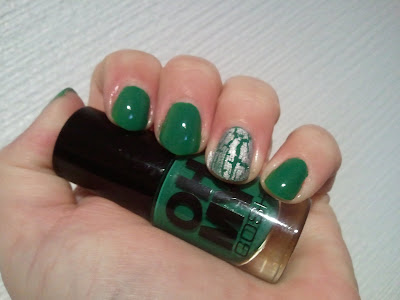 I thought this had uploaded but it totally had'nt! Anyway, this is the mani I did on Tuesday night...

GOSH has launched a new line of nail polish called Oh My GOSH (clever..); I don't know if this will take over from their normal range, or be a 'current fashion shades' range. This is "Apple Green", similar to Essie "Going Incognito" and OPI "Jade Is The New Black". All the shades in this new line are cremes. All these are £2.99.

This had a lovely formula but just slightly slightly runny. This is two coats with MegaShine. I just love this kind of muted creme green :) I have a couple of thin patches of polish, I think I must have been too eager and not waited until it hat set and so dragged off the underlying layer when putting on the second layer. Can only see it up close though so it's fine! :)

I also found that BeautyUK are doing shatter polishes, also at the bargainista price of £2.99! And it's decent too! On my ring finger is a quick coat of "Glam Rock", the silver metallic shade, with MegaShine over it to gloss it up.