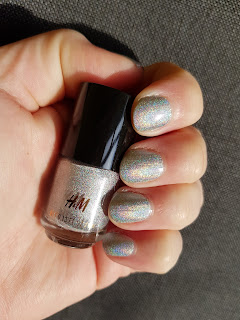 This is yet another one from the H&M nail polish advent calendar! I have been out of the holographic nail polish loop for too long to remember what the definition is of this type of holo... Linear, scattered?.. who knows. It's lovely anyway!

I did 2 coats here but it really doesn't need it. It dries quickly, and unlike many other holos I've used, it doesn't scatter when you top it with a top coat. As with most holos I can't see this lasting more than a couple of days on me even with a top coat, but it's totally worth it!

Top marks again for my stash from this advent calendar! ⭐
Posted by Lina-Elvira No comments: 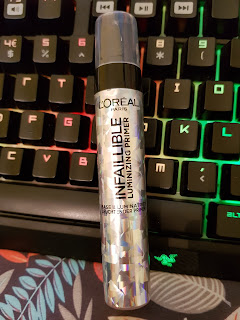 I've got very dry skin on my face at the moment, it's almost impossible to wear foundation as I permanently have little dry flakes on my skin which the foundation grabs onto. This means my skin is also rather lacklustre. Who said pregnancy gives you a 'glow'?! What a load of 💩

Anyway I've been searching for a new primer for a while. Something to just fake that glow. So I picked this up from Boots - mainly because of the bottle probably...

The salespitch on the bottle says "Instant super glow effect, extends makeup wear. Ultra lightweight formula. Use under or over makeup". Sounds promising. I pump some out and go... "is this a highlighter or primer?!" to myself. Definitely says primer. I rub it on. Oh yeah. Hello glow face! But at the same time, I'm a bit worried I'll end up looking like a heavy-handed highlighter fan... But nothing ventured nothing gained!


I followed with my current favourite face product, the Urban Decay 'One and Done' complexion perfector. And I love the result! The primer may look shimmery and glowy on bare skin, but under a foundation/BB cream it makes your face actually look glowy but not oily, not glittery or highlighted!

My makeup also wore a bit longer, being a complexion perfector the Urban Decay offering wasn't going to last longer than 5-6hrs or so anyway before fading but I have since tried it with an actual foundation, which wore great past the 9hr mark.

I am loving this - I also noticed that there are four other primers in this range, from mattifying, pore refining to anti-fatigue and anti-redness, so there should be something for everyone. But this is definitely the one for me!

At £8.99 for 20ml at RRP, maybe I do feel it's a bit over-priced? If they charged the same for 50ml, I would be on board with that. But I will probably buy this again!
Posted by Lina-Elvira No comments: