HAUL: Lots and lots of stuff from NYX! 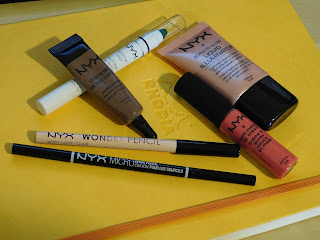 When my Boots opened a gigantic NYX section last week, today's lunchtime destination was clear (after I bought a cover for our new BBQ in Argos...). I'd saved up lots of Boots points for this type of gratuitous random splurge, so what did I get??

I had heard some good things about the Micro Brow Pencil so that was my first purchase. I picked 'Ash Brown' over 'Taupe'. I must be a secret Cara Delevigne wannabe... It is perhaps that smidge too dark, but I think I would feel 'Taupe' was too light. Then I was like 'hey Eyebrow Gel, this looks awesome'. So I bought a tube in the shade 'Chocolate'! One can never have enough eyebrow products. No really. One can't.

Then I saw the Jumbo Eye Pencils... I was going to get them all but didn't think that would be rational. So I went for the one I've wanted since forever - 'Rocky Mountain Green'! It's a vivid metallic grass green - totally amazing! I thought it might be similar to the Barry M Eyeshadow Pencil 'No 3 Green' but it's not even close.

I then ended up foolishly in the vast selection of lip products. I swatches several but it was the Soft Matte Lip Cream in 'Ibiza' that made it to the till with me! What a scorcher! :) I secretly hope it will be as good as my Collection Creme Puff Lip Cream...

On a whim I picked up the Wonder Pencil. Sadly there was no testers so I ended up with the rather ghostly 'Light' when I should have gone for 'Medium'. It will go to a good, paleface home later in the month while I replace it with a darker shade.

I also definitely needed the Liquid Illuminator in 'Gleam'. Because clearly I need more highlighting products... :( But the swatch is awesome and I think I will like this one. It's a bit glittery but that doesn't matter - it looks amazing on the face!

So look out for detailed reviews of the above once I've tried and tested it all! :D 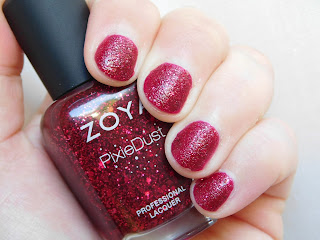 So I had eyed up this polish some time ago and bought it, then never wore it. So it was time. It's no secret I luuuurve a textured polish so I was quite excited!

But I don't like this. The polish effect on your nails is nothing like what you hope it would be when you look at the bottle. The jelly base is nice but the glitter just doesn't translate to the nail. I also never got the sandy, matte effect I have had with other brands.

Nothing else to say other than this is sadly 2 wasted coats and a wasted £10 or whatever I paid for this back last year... :(
Posted by Lina-Elvira No comments: 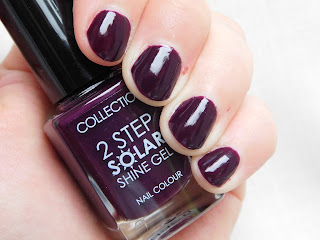 I saw this new line advertised and of course, it being Collection Cosmetics, I had to try. It's the usual 'gel without the UV light' sales pitch. I don't expect to get 10 day wear from anything other than actual gel polish, but I am up for trying anything! :)

I toiled over the colour choices. The colours are basically split into two groups - neutrals and bright colours. I really wanted to try the bright pink "Sunset Pink" but then I thought, no, lets go dark, so chips and such can really be tested!!

So I chose the vampy burgundy "Biarritz" instead. I also bought the matching top coat, to make it a proper review. Both products are RRP £3.99, so indeed rather affordable. I did 2 coats of the colour and then 1 coat of the top coat. Drying time wasn't too long, and the formula was a breeze to paint on. Then came the hard part - wearing the same manicure for 7 days...

And check the before and after - there is very little tip wear after 7 days. And I was not kind to this manicure. I did a bunch of proper cleaning, some gardening and a lot of typing and crafting.

I am always nervous when it tells you not to put on a base coat. Especially for this kind of intensely dark shade... I anxiously wiped my nail with my trusty acetone remover. The polish comes off as easy as any old creme formula, and there was absolutely zero staining!

This is a 5 out of 5 stars for me - I will be hoofing it to Boots to get the pink tomorrow for my late summer holidays!! :)
Posted by Lina-Elvira No comments: 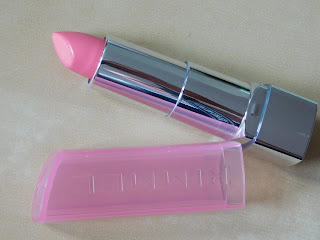 No secret I love a tinted lip balm. When I saw these, I thought "oh, maybe it's a bit more like a lipstick, but also a tinted lip balm?".. Then I thought "hang on, these remind me of Revlon ColorBurst Lip Butters". And they are pretty much the same - even down to the colours I've bought!! The Revlon may have a smidge more pigmentation as a swatch, but on the lips they look and feel the same. The Revlon range has more colours though.

Anyway back to these new Rimmel lipsticks. The range consists of 6 colours in the shops, but there are more colours advertised on the Rimmel website? When I Google these colours it looks like they are sold in Europe only... I first picked up the bright fuschia "Pink rules", but then lowered my ambition and went for "Glow-rious Pink". Glad I did, I think I will get everyday wear out of this as opposed to a brighter lip! This shade is a 'just right' pink nude.

The feel of these is like a rich lip balm. The colour payoff is a strange hybrid of balm and lipstick. The wear time was a moderate 2-3 hours tops but it wears off nice and even and leaves a very slight stain. It's easy to reapply as you don't need to be too precise about it. The formula is nice and moisturising on the lip. In a world with aging matte liquid lipsticks, this is a lipstick I can get on board with! :)

These lipsticks don't have the horrible scent of 'The One Lipstick', thank goodness. I also like that these have a SPF20 :) All and all I think these are great and perfect with a summer tan! These retail for £6.49.
Posted by Lina-Elvira No comments: 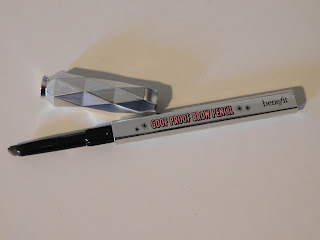 Unlikely to be any beauty blogger out there who isn't excited about the new eyebrow product launches from Benefit!? :) This month's Elle UK magazine came with a free sample of this new pencil so of course I needed to try.

The pencil is drop-shaped with the intention that you can fill in and shape the brow easily. I found the pencil needed to warm up before it started issuing colour; I just hold it again my wrist for a few seconds so no biggie. It's almost like it's just a pigment, not a pencil?.. I fill in the brow then used my Avon brow brush (seriously best brow tool ever) to soften it, then put Benefit GimmeBrow on top!

So what's the verdict? Awesomeness! :) The colour I got is "2" so I think it actually fits me perfectly. The wear is spot on - as it's some kind of weird long lasting pigment my brows were superb all day. Works really well with GimmeBrow, which is my fave old eyebrow gel.

So I will be hoofing it to the Benefit counter on the 24th June, who's with me??
Posted by Lina-Elvira No comments: