Was at a shopping spectacular this evening in town - many shops were offering discounts and special deals and were open late. I headed off thinking it would be packed and crazy like January sales, but appears most people didn't know there were special deals to be had so it was quite calm and empty :)

I got a couple other things but thought I would show you this Primark find. So again Primark is on the ball with trends - they not only have this awesome foil set for the sweeeeeeet price of £3, but also a chalkboard nail art set for £4! There are also various caviar manicure, full ombre kits and glitter / 3D nail sets to choose from, so if you have nail geeks for pals, or want something cheap and cheerful for yourself, head over there now!! In fact I think it's probably a good idea to get myself another one of the these kits before they sell out as a backup.

Not about to try this for myself just now at this hour, so here is just a brief low-down on what the kit looks like (full instructions printed on the back of the box):


Looks like it's gonna be awesome!! But that polish that comes with the kit will likely get binned - it's weird, flesh-coloured glittery yuk-ness. I'm thinkin' black nail polish with these foils :)

I'm going to be starting my Manicure Advent Calendar on Sunday so I think I will be going without polish for the next few days to boost the wee ones up a bit before the onslaught...

And apparently 'The Queen's Favourite Nail Polish Is Revealed'. It's really boring. I am not sure why I was hoping it would be some kinda glitter polish.
Posted by Lina-Elvira No comments: 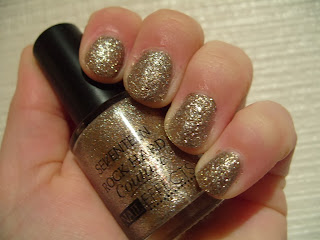 I fancied something bling but easy to achieve today! And I remembered I'd not worn "Charm Bracelet" yet so it was an easy choice :)

I have run out of my Bourjois So Perfect gel base coat so that's a definite Boots Advantage Card points job for tomorrow's lunchtime. I went back to using Sally Hansen Nailgrowth Miracle as I still had half a bottle of that. This is 2 coats of "Charm Bracelet" without top coat. It was really hard to photograph as it's so insanely sparkly!! I love it just like I love the other Rock Hard Couture polishes :) Now, if Seventeen could just do a green and fuchsia version of these as well....
Posted by Lina-Elvira No comments: 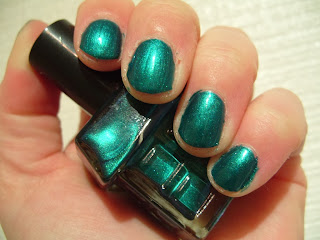 I found this whilst going through the Helmers thinking 'I have nothing to wear!.." I decided I would give it a go, although fearing it might be sheer. Not so. But the brush is shit - the polish goes everywhere. And the smell (urggghhhh....) means this is loaded with serious killer chemicals. The first thought I had was gloss paint that you use for windows? Phwoooaar... Awful. Not smelled a nail polish like it before? This is 2 decent coats (some brush-strokes) and a layer of MegaShine top coat. It's a bit warmer green than this - I am struggling to capture this polish at all in artificial light!

I somehow managed to get nail polish in my hair though while painting!! Waited for it to dry and cut it away. That is a first for me in the 22 or so years I've been doing nails.... I sooooo need a haircut!

I am having a bit of a nightmare with dry hands again now that we have had the first snow and the temperatures are right down. I have recently been trying Dove Pro.Age Nourishing Hand Cream and it's actually making a bit of a difference. Not that I have age spots yet but I thought the AHAs might exfoliate some of the flakiness... It goes on nice and light, isn't sticky/greasy-feeling and smells nice :)

And coming up to Xmas, check out this amazing idea for Xmas ornaments from The Nail Network!
Posted by Lina-Elvira No comments: 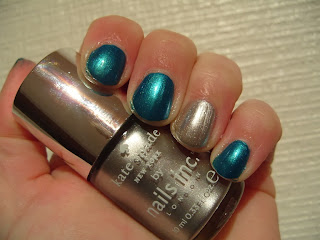 Ah the times when I have an idea that seems so good at the time, but then turns out crap. So I ended up with this after trying to take off the accent nail I'd done whilst trying not to ruin the other nails... Anyway. It's a rather boring manicure but it will do until the weekend!

I used Nails Inc "Hanover Street" for the blue and the silver is Nails Inc "Soho Silver", which is by chance free with this month's Glamour magazine (bargaintastic at £2!). This is 2 coats of each over base coat and a layer of MegaShine top coat. Both these are kinda brush stroke-y but hey :)


Posted by Lina-Elvira No comments: 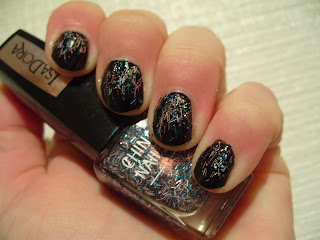 I didn't wear polish for quite a few days after scrubbing off Maybelline "Woven Skyline", I was that traumatised... :( I really need to use the PVA glue base coat for the next time I wear it! I cut down my nails again for starting my next block of snowboarding lessons on Friday (it was sooooo cold we actually had snow on our boards!). When I finally got round to thinking up a manicure this evening I decided to try a gradient with another one of the Isadora China Nail Art polishes. I used Sinful "Black on black" and then layered Essie "Carnival" over it. to give some background sparkle. I then put on a layer of "Shantung". It dries really quickly and the bar glitter is quite dense so it ended being a semi gradient... However, the end result is really bling-y :) Love it! The photo only hints of sparkle that this produces in direct light!
Posted by Lina-Elvira 1 comment: 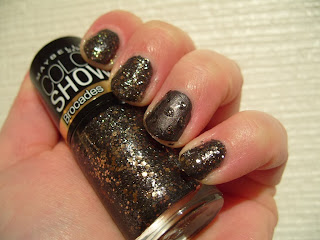 After making a cracking manicure for a client on Saturday I wanted to make a killer manicure for myself but managed to have an idea that seemed so good at the time but actually turned out rather dull. No matter. I love the Brocades, sooooo sparkly! This is 2 coats of "Woven Skyline" (what the hell is the deal with that name??) and a seal of Seche Vite. The accent nail is Collection Hot Looks "All that jazz" with dots of "Woven Skyline". Seemed like a good idea at the time... I am anticipating this be absolute hell to soak off - I think I might use the foil wrap method :)

I did some special nail art on a client's nails on Saturday and it turned out really cool :) I wish that I had just done the same one for myself - I really love the dramatic black with the ultra-bling! I used Sinful Color "Black on black" (BEST black ever!), Essie "Carnival" and Claire's "Chunky Silver Glitter". 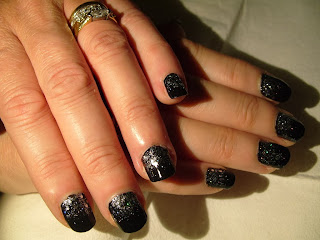