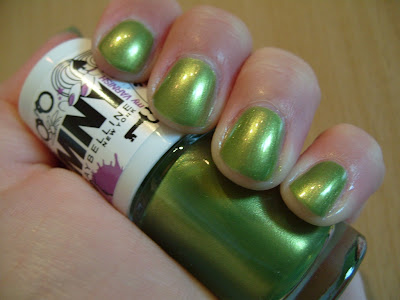 First day of my 3-day holiday (I know, it's soooo extravagant). After taking delivery of my shrimp babies, I went to Asda for scotch pancakes. As I cruised past the Maybelline stand my eyes fixed on their daughter line MNY which was sneaking it's way onto the main Maybelline stand, and hello green nail polish! :) For £2.99 it's worth a try.

As expected, it's sheer. This is 3 coats, could've done with 4, but I had had enough nail polish fumes after spending the afternoon outside in the sun and fresh air! I put on a slick of MegaShine over the top.

The thought struck me it is similar to China Glaze "Moonpool". But "Moonpool" has a hidden depth of green with a golden flash but "753" is more a shimmery golden lime?.. It's more similar to Mavala "Electric Green".

I'm off to look at my shrimps again to watch them feed on the little algae wafer I put in for them!
Posted by Lina-Elvira