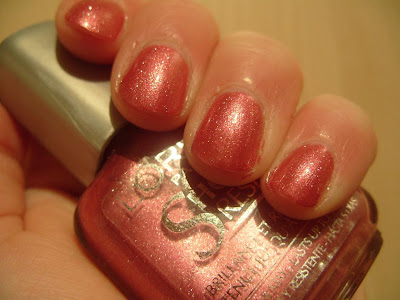 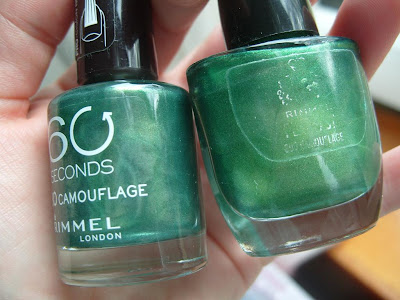 This is one of my old time favourite nail polishes, I am wearing it to show my love for it this Valentine's Day! It's a touch warmer pink (but not as coral as the photo makes it look) and a whole lot sparklier than it's nearest cousin OPI "Arose by dawn, broke by noon". It's glitter is almost like OPI "Princesses Rule!" but I wouldn't say it's a glassfleck sparkle. Dang hard to photograph though!!! This is 2 coats with Sally Hansen MegaShine top coat. Man, I love this polish so much!!

So I finally got a bottle of the new formula of Rimmel "Camouflage". I was hoping that the two would be identical - this is NOT the case! Not even that close actually. Still a lovely colour, but I prefer the old formula; it's much more golden, sparkly and warmer. I will do a proper comparison this week so you can see the difference on nails next to each other. I will need to buy myself another old style "Camouflage" I think while there is still time... Also another weird thing - UK bottles of 60 sec Rimmels are only 8ml, the US releases are 12ml, but the brush is the same. As far as I am aware, "Camouflage" was never released in the UK.
Happy Valentine's Day to all of you, dear readers!
Posted by Lina-Elvira

I have to agree with you, the old Camouflage looks nicer. More "alive" in a way