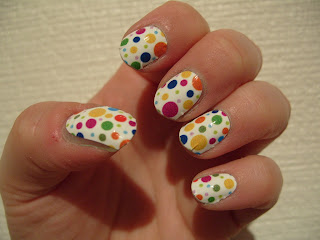 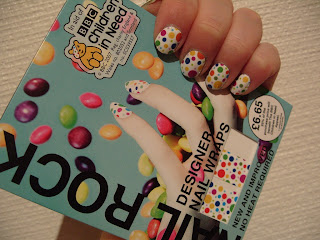 Every year, the BBC hosts a giant spectacle called Children In Need to raise money for just that! This year, Nail Rock did two sets of designer nail wraps of which 25% of the price goes to Children In Need. I saw them by fluke in Boots and I am very glad I bought them! I just love the spotty pattern. There was this white version and also a black version with coloured spots. The pack contains 16 nail wraps and I still have six bits left to do maybe two sets of pedicures and a feature nail :)

Nail Rocks do not require heat to put on or remove from your nails, other than that they apply pretty much like Minx or Kooky Nails. I have a very strong C-curve on my nails so nail wraps are very tricky to fit, especially when you are doing it on yourself... Hence I have wrinkles on them. I have not tried Nail Rock before so I will let you know how they wear!

EDIT: I had to take these off after about 24 hrs as they were starting to peel off and wrinkle up. With patience, they come off easy and without nail damage. The trick is to pick it up gently at a corner and GENTLY and SLOWLY peel the sticker off the nail.
Posted by Lina-Elvira