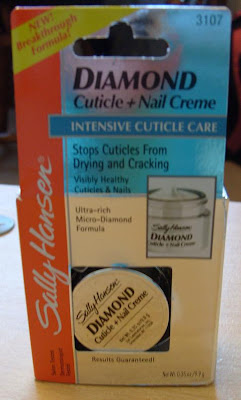 I've suffered some extreme cuticle conditions lately so I've been trying out different combinations of oils and creams to get them to behave. They're splitting and bleeding and look terrible, which you can see in my recent NOTDs.

I got myself Sally Hansen Diamond Cuticle+Nail Creme as it looked promising in it's claims to turn dry, neglected cuticles and brittle nails to smooth cuticles and strong healthy nails. This is concoction is described as "ultra-rich". They're not kidding. It's like putting putty on your cuticles. It's even thicker than Lush Lemony Flutter. It has a strong coconutty smell to it which lingers a bit, so it's best put on before bedtime.
But it so works! I'm never trading in my lovely, luxurious Solaroil for everyday cuticle maintenance but this has certainly turned the tide on my superdry cuticles. I will probably use it as an intensive treatment. It's pretty expensive for a drug store brand at £7 but as its so thick, I think the product it will last a good 6 months at least.

Lina-Elvira Loves It Thiiiis Much:
♥ ♥ ♥ ♥
Posted by Lina-Elvira

contests and such said...

OOoo I might have to look into this! My cuticles sound like yours and if it worked for you, it should work for me.
THanks!

My cuticles look like crap also. I keep clipping all the dry skin off. I don't know if I should stop the clipping. They feel terrible and I hate the way it looks. I use Solar Oil when I remember. I use handcream all day long. Any ideas about the clipping, yes or no?

Nessa - Try it, its made a difference using it twice a day already and its only been a few days:)

Lucy - I would say no. I used to clip but if you start keeping them oiled and pushed back (but not too far back) they will soon start behaving better. But moisture is the key, don't skimp on the cuticle oi/creme.

I'm a big fan of this. I bought one in November and it's only about half empty with daily usage. I bought it on eBay for £3! It's so thick that I can't use thin, puny creams anymore!

I came across many queries in several forums where people have been asking for advice on the best glue that can be used on nails and that is not only strong but also safe on nails. This was the same question I had sometime back when I used to apply nail gel myself. Initially the glue I got would never hold on the way it used to when done in the salon. I then came across the nail glue being sold on gel-nails which lasts very long and is pretty easy to apply. It provides a strong bonding for my nails and also does a great job in repairing the nail tips.

Most important of all is that this is strong glue I was actually looking out for and this is used by nail salons and nail artists for professional applications. It is available at a cheap price at gel-nails and I remember seeing it at a discount of 74% which is great. Maybe this can help if you also face problems relating to poor glue quality as I did earlier.