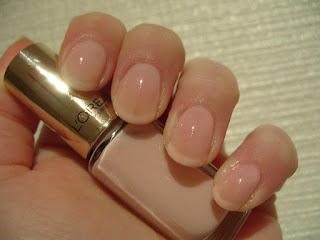 I tried this on with a French tip as a possible wedding manicure. But it's a bit too opaque?... Hmmm... I made a French tip with an old trusty white tip polish and then put on one coat of 201 and a coat of 202 over it. I wanted to make a mix of milky white and pale pink like Kate's manicure for the Royal Wedding. It also balded a bit in places, I probably didn't leave the layers to dry long enough. I think I'd have to mix them together to get a similar result? But I've now decided to try the original shade I had in mind, Essie "Vanity Fairest" as a French Manicure. I'll put that on tomorrow and see how I like that.

I had my Bobbi Brown eye and lip part of my bridal trial on Thursday. Something in the eye makeup gave me an allergic reaction. I had a gel eyeliner put on which I think might be the culprit... Anyway, safe to say it wasn't a success, so I am still looking for a nice eye makeup! I did really like the other stuff I had though during my first trial and have worn the foundation again today, over Smashbox Photo Finish Light primer and it looks great :)
Posted by Lina-Elvira