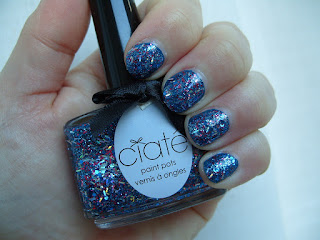 I went to see my best old pal, his wife and my so-called faux-nieces yesterday and received a very late birthday present! :) They know me too well - it was two Ciate nail polishes! It may be that my youngest faux-niece might also be obsessed with nails, although she's not allowed to wear actual nail polish, just kids polish. But that hasn't stopped her collecting nail polishes in anticipation of 10 years from now... The first thing she did was proudly show me her light pink (the colour was very meticulously described) manicure! :)

Anyway I decided I wanted to try "Monte Carlo" first. I layered it over a coat of the exceptionally pigmented navy creme Nails Inc "Hanover Sq". I had to dab the polish on a bit to stick the maximum amount of glitter. It is a top coat eater so I put on 2 coats of Seche Vite but it's still kind of bumpy. I predict tears when I remove it but it doesn't matter as it's so pretty! :) I had to take photos of this in the shade, the sun completely washed out the base colour for some reason.

I am going shopping with my li'l bro today and then I am finally going to see Avengers: Age of Ultron in the cinema! :) But I am also hoping to make some new videos today and tomorrow for the YouTube channel so keep your eyes peeled for those!!