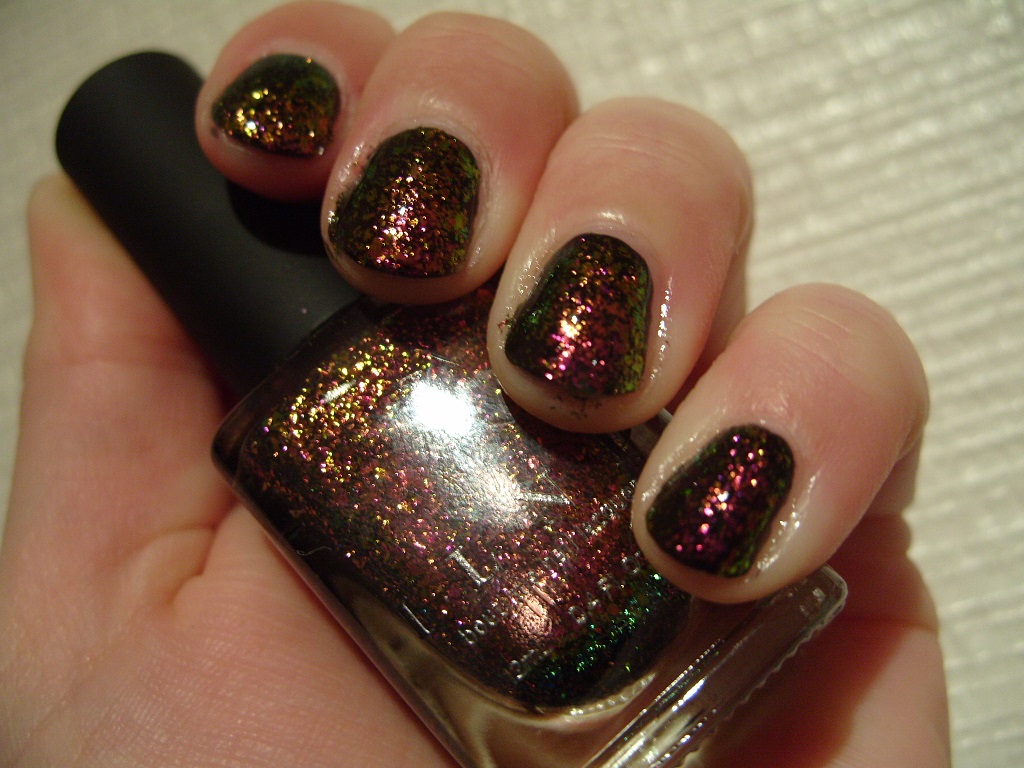 I only bought one of the hyped ILNP Ultra Chrome Flakies and this is it! I wanted to wear this several times but something else always caught my fancy instead?? It looks nice in most lights but is amazing in daylight (going by the swatch on my nail polish wheel). Now that Xmas is over I think that possibly I wanted spring colours and not dark ones?..

The brush was fine, but the formula caught me out a couple of times (yeah, I was overloading the brush) but it goes on smooth and more opaque than I thought :) This is one coat over black (Sinful Color Black on Black, of course). I slicked on some Seche Vite and decided to go snappy-snappy. Not pleased with any of my photos :( the duochrome and flakies goodness just doesn't really translate in artificial light. I will take another photo for you tomorrow in daylight!

In other news, I have bought a new web cam and I am planning on branching out to some videos as well. I have been playing around with video editing software this weekend for some holiday snaps and would like to try my hand at doing more beauty videos :) But as I discovered the web cam I have is about 6 years old and to be honest, absolute sh*t. As my Mum said when we last spoke on Skype and I was using my Samsung Galaxy S5, "Oh I can actually see you!".... Ahem. Sooooo, I am hoping to get some videos done as soon as the magic gadget arrives later this week, if my leg isn't too sore (having surgery on my knee on Thursday - eeek!).

I'm working on a review of my new Makeup Revolution Vivid Blush Lacquers which I acquired last week. I have been road testing them and I am in love :) I will try and make a video to accompany the review, so keep an eye out!

UPDATE: With our new Nikon Coolpix L830 and daylight, this captured beautiful! Oh and by the way, this is 3 days of wear :)
Posted by Lina-Elvira