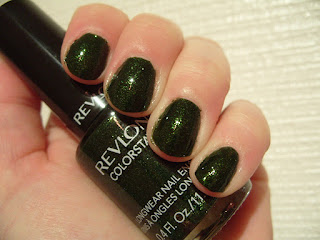 Last night I decided to put on the new Revlon polish I bought in Glasgow. I used my new 'toy' I got from my brother - a pink bendy clamp-on LED light from IKEA called 'Jansjo'. How awesome! :) I've been struggling with the light for some time in the house, it's just too dark everywhere to paint my nails properly. This light is 'brilliant'! In this instance the formula didn't help me - application was messy :(

The new Revlon 'gel formula' is fairly thick and opaque and the brush in my bottle wasn't very good. It seemed to overload with the polish and pool on the nail. It covered well in 2 coats however but was tricky to apply neatly. It dries fairly quickly though and to a high shine. I already have tip wear however after just one day of office work... But I am the chipping queen so it's rare that polishes last more than couple days on me so that's not necessarily something that will happen for everyone! I will probably get another couple colours from this new collection once they hit Aberdeen!

I think this looks like a bit of a moss-green version of China Glaze "Zombie Zest" maybe? Or a more golden China Glaze "Emerald Sparkle"?? What do you think, have you tried the new Revlons and if so which ones do you like??
Posted by Lina-Elvira

i'm into green shades and this looks really pretty :)