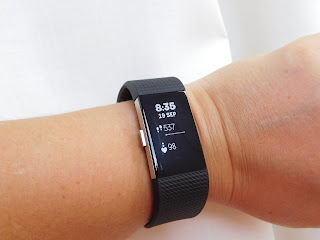 Wearable fitness technology is all the rage right now. But I bought my fitness tech because frankly I'm fat and struggle to keep as fit as I should be, and I need something to help me keep motivated. That's it. I will eventually give a full review on this new bit of kit, however here are my out-of-the-box and setup first impressions. The Fitbit Charge 2 comes in 4 colours, and you can buy leather bands for it as well.

It comes in a box with a weird-looking clip-on charger and scant instructions. Good thing I am a thrifty consumer and had watched umpteen YouTube videos before committing to the £129 price tag, or I wouldn't have a clue how to set this up!

With so many different kinds of trackers out there, why did I choose the Fitbit Charge 2? Hard to say, but I think the features you get for the price is the dealbreaker. I am not an athlete so something that does the everyday fitness stuff is better for me.

The Charge 2 has a heart rate monitor, which is actually good if you like to keep an eye on what your blood pressure might be up to. People have rated it very good for sleep tracking which will be interesting! I also liked the sound of the interval training mode as I like to run-walk and not just run.

I must also admit I was totally drawn in by the new 'Relax' mode where it gives you a 2 or 5 min guided breathing exercise...How much I'll actually use it I don't know but hey I'm gonna try it! And you can set it to issue buzzing reminders to get up and move every hour. That will probably get really annoying after a while but at the moment I am excited to try it out!

NOTE: you cannot just use this thing on its own to track your fitness! You have to use either a smartphone or a computer with the Fitbit app alongside it. There is a handy list on the website which devices and OS it supports. I use it with my Samsung Galaxy S5 with the Android app (I have Marshmallow OS). The app itself has such a vast amount of information you can collect that it will take you some time to get used to it all and to set it all up.

This syncs with your smartphone using Bluetooth. I didn't realise just how annoying this would be. I have never really used Bluetooth before and find it's a bit fiddly to get the devices to pair. But maybe that's just me - perhaps more experienced users will not have this problem. Once done that's it done though, I guess.

I also found that constantly using the Bluetooth (and Location, as it won't work with that turned off!) drains the life out of my smartphone battery like nobody's business?! I have now bought a Veho Pebble Smartstick emergency charger to deal with unexpected shortfalls, but I am also starting to switch Bluetooth and Location off and only syncing the Fitbit occasionally through the day to save juice. But technically this is an issue with my smartphone, not the Fitbit, so I should stop moaning.

The Fitbit app has so many variables and mode of tracking, you just have to spend some time to get to know it and your device! :) I enjoyed the silent wakeup alarm this morning, no loud beeping noises. However if you are a heavy sleeper you may benefit from a back up alarm...

The strap on this is changeable so that's good - I have heard people having to replace their whole unit on the preceding model the Charge HR as the straps have kind of disintegrated with sweating! The strap is soft and comfortable even if you are sleeping. Some reviewers commented that it was difficult to get off once on, but you only really take it off when you have a wash so shouldn't be too much of an issue...

The unit isn't waterproof - it is sweat and splashproof but you shouldn't shower or swim with it.

The only thing I am kind of thinking is a bit weak so far is the vibrating feature. It's very subtle and you may not actually notice it if you are exercising... But maybe I am just too hardened!

So here's to many fun months of tracking my fat ass around town :) Check back in a few weeks to see how I'm getting on! :)