I'm back - with a Swedish holiday beauty haul! 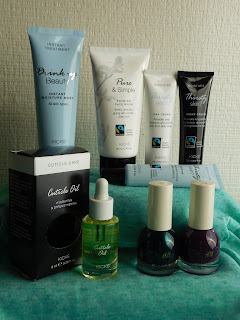 I was on holiday back in Sweden for the last couple of weeks. I wasn't really in a mood to blog so that's why it's been quiet for a while. All refreshed now though and ready for the next couple of months!

I didn't really do much shopping - we went to a large shopping center one day as it was raining so much but other than that I definitely just was out looking for wildlife and enjoying time off. I did buy some clothing as well, and acquired two pairs of shoes off my Mum as she didn't fit into them. More on those in another post.

Of course, the top destination in Sweden is usually Kicks which sells makeup and beauty products. This year I decided I was going to go more for skincare as I have soooo much unused makeup it's not funny. Kicks' own line of skin care comes in a range of products but I decided to get this starter set for hydration (four products on the right on the top row). It also contains fairtrade ingredients so I felt a bit more ethical. I found it was good but I'm not blown away. My favourite was the face wash. Mainly the strong scent is putting me off? I don't mind a slight scent but these products are all highly perfumed. So not ideal if you have sensitive skin.

The mask (top row left) is a hydrating cream mask, again from Kick's own line. I clearly needed the moisture as I had nothing to wipe away after 5 min... Some bloggers have suggested that you add a second layer but I've not tried that yet. Won't repurchase this, but exciting to try new things nonetheless.

I then also got Kicks own cuticle oil in the bottle. Now this I love! It has a slight scent to it but nothing strong. It absorbs easily but moisturises deeply. I put this on at night only even though it says morning and night, but I just don't have time for this in the morning! I think it works better than my old fave from Nails Inc. Will likely acquire another bottle of this through my Mum when it runs out!

Finally, of course, I nipped into H&M and perused their makeup line (as you can do in Sweden but not in the UK). After actually getting to swatch some of the other makeup in the line, I am convinced that the nail polishes rocks but the other stuff is just a bit meh. Eye shadow isn't really my thing, and I am rather picky with lip products and blushes. I don't do eye liners. The foundations all felt a bit cheap. I picked up two polishes that stood out, and you'll see these soon as NOTDs. I think I need to do a swatch wheel and post on my H&M polishes, I have so many...

So that was it, really. I think I was being rather restrained this time in shopping, and I think it's because nothing has really taken my fancy. I'll deal with the clothing and shoes possibly in another post but I'm not really a fashion blogger so I find it awkward to photograph clothes and shoes. While I was away I also got some more stuff online,  like one of the new oval rose gold brushes from Makeup Revolution, and a new nail polish from MAC form their Star Trek collection! So keep your eyes peeled! :)
Posted by Lina-Elvira