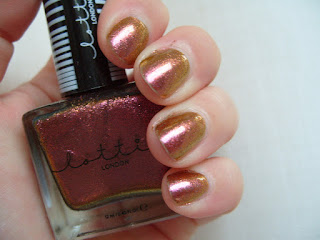 My favourite Superdrug had had a serious makeover last time I was there, and they now stock a range of new brands such as Lottie London and theBalm. With all new shelving units and.. *faints* I have decided I am not allowed to go there now until Xmas or I might spend a lot of money. Anyway...

I did come away with this nail polish from Lottie London, it looks awesome in the bottle so I bought it. I know these are meant to be a bit more 'boutique' than Rimmel etc but I think the £5.99 price tag i a bit on the steep side?.. maybe I am just too cheap? Good thing I had £1 off with Superdrug loyalty points!

There are a lot of cremes in the colour selection, but there are also some more edgy affairs such as the glittery "To and frow" and a small particle black holo glitter called "Adorbs". I am clearly old as I had to Google 'adorbs' to find out what the hell it was...

So saying 'adorable' is now so clearly uncool. Please don't use it or you will be labelled as 'old'. My mission is to use this phrase at least once next week!

I digress. They also do a couple of duochromes, of which this is one! I struggle to get good shots of duochromes on the nails. The actual colour on the nail is a more gradual version of the bottle colour. It's very glimmery and again one of those polishes you probably shouldn't wear at work as you end up staring at your nails :)

I did 3 coats here, I find these types of polishes are relatively sheer but that means you get more bling! It has a nice formula and a good brush so doing 3 coats wasn't such a chore. I topped it off with Bourjois 3D Gel top coat. Looks so lovely - like a tree with blazing autumn leaves :) I like it and might try a couple of other polishes from the range at some point!

Oh and I did a video on some new bargains I've got lately, but I did it before I went to Superdrug so this particular polish isn't in it, but a bunch of other stuff is :)

Hi, sometimes putting a more opaque coat of polish on helps and thus reducing the coats of polish. I would suggest a metallic gold or bronze color then 2 coats of 'adorbs'. Lol. Only trendy big city people and teens use adores on the reg... i.e. regularly ;) Theres a pretty good video from a couple years ago of a dude dressed up as an NYC fashionista, during NYC Fashion week. I'll see if I can find it for you.

Hello I have in the past done more opaque colours underneath but I find you won't get the glimmer and depth of duochrome - the opacity building up is what gives you that.
I'm too old to use slang, just can't be bothered, I just use mix in more rude words instead... :P