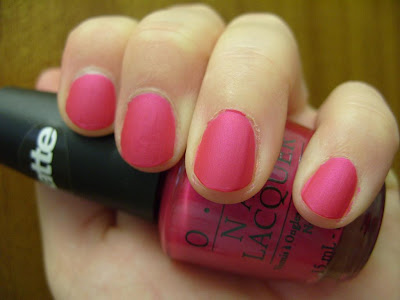 I am a sucker for retina-burning hot pinks, as you know, so when I saw it in Scrangie's swatches, I had to have it. I don't actually own the regular version of "La Paz-itively Hot", funnily enough.. I might have to put up a swap post for it.

I had chips after a day with my Zoya "Posh" but I still just adore the matte look as it's soooo far off normal nail polish. As long-term readers of the blog will know, my first satin love was Savina "Marine Life", which isn't actually marketed as a matte. What I like with the Savina is that it has a satiny finish. The OPI is kind of chalk matte, not a speck of shine. The Zoya was a bit more satiny but not as shiny as the Savina. Both my mattes have applied opaque with one coat. However, I put on 2 coats here for more depth. It dries lightning fast, but not in a good way...

And do I like it when it's actually on my nail? Oh goodness yes! It's like chilling in a gorgeous bikini with a nice icy cocktail under a bright parasol on a sandy, hot beach listening to the sounds of the sea... :) That sweet holiday feeling in a nail polish!

But saying that, I can't see myself getting any more mattes. Zoya "Posh" and OPI "La Paz-itively Hot Matte" will be my only choices for the matte trend. One reason I won't get any more is as it would probably ruin the novelty of putting something matte on. The Essie "Matte About You" matte top coat is really hot, so I have heard, so if you want you can get that one and just put it over any colour of your choosing! But if you only get one matte, consider "La Paz-itively Hot" or Zoya "Posh" to be it!

Now what can I possibly put on tomorrow that will go with my gorgeous nails?? Leopard-print silk scarf and a killer LBD you say?.. :)
Lina-Elvira Loves It Thiiiis Much:
♥ ♥ ♥ ♥ ♥
Posted by Lina-Elvira

Zeke, I know ya love this ya evil beech!! :P

I love that polish on you. I have Posh and I love that color but chipped fast. Went to bed and woke up with three chips. The Essie matte topcoat looks like a good way to go with the matte look. I really love all the mattes but I don't know if I want to buy them all.