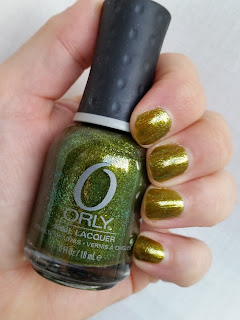 So this is an oldie but goodie, and a perfect ghoulish slime green glitter for Halloween! This is 2 coats with a slick of Sally Hansen MegaShine top coat :) 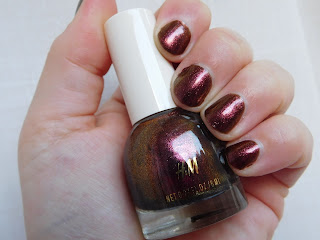 It's no secret I love the new line of nail polish from H&M :) Here is another beauty! I must say the greeny-gold duochrome does translate a bit more to the nail than you can see in my photo, and if your nails are longer than mine you will have a stronger effect as well.

Don't mind the ding in the polish on my ring finger which happened literally one minute after I had finished my manicure and I would've made it worse trying to fix it... :( Typical!

This is 2 smooth coats with Sally Hansen MegaShine top coat. Loving this - so autumnal! :) The formula of this is similar to the "Nocturne" polish I have from H&M; quite thickly glittery yet easy to apply.

I feel I should be pairing this with my dark red velvet sweater which I bought when I was 16 and I still have it (and it still fits!).
Posted by Lina-Elvira No comments: 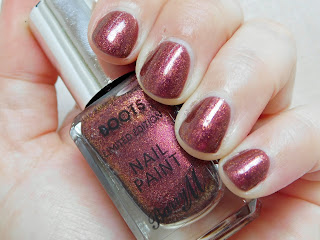 I never get tired of a limited edition exclusive from Barry M :) See the recent Superdrug exclusive here.

This is a perfect autumn polish! As you can kind of see better in the bottle, there is a slight gold duochrome to this. I think it looks a bit like one of those really nice maple leaves when they start to turn golden in the autumn :)

I did 2 perfect coats here. I am not sure if the super-wide brush is new, but for this polish it works really well! I finished off with a coat of Sally Hansen MegaShine because I am a speed dry junkie...

This manicure is certainly cheering me up; I have a raging cold again so I needed something soothing on my nails...
Posted by Lina-Elvira No comments: 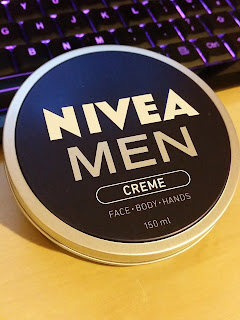 Yes indeed, this post is about a men's grooming product. But not because of it's use on men, but on my hands!

It's no secret my hands, despite being primarily a nail blogger, are sorely neglected. Well, that's not true. They are hard-working, not neglected. Spending a lot of time outdoors, and doing things such as arts and crafts and cooking and cleaning, certainly takes it's toll on hands.

Until now I haven't found a cream that can actually hack my hand needs. So maybe I needed a men's grooming product because men's skin is just more neglected than women's so it's more potent??

Anyway, here is Nivea Men Creme. A classic moisturiser for 'the man'. Apparently you can use it on the hands, face or wherever you may need it. I find it's richer than your average cream, so can take a few minutes to sink in. It has a faint whiff of 'man-smell'; an unidentifiable cologne scent. This isn't unpleasant, far from it, and it's very subtle.

I would liken the effect of this to that of the original Nivea Creme minus the oily residue; the consistency is in between Nivea Creme and Nivea Soft. My hands are finally looking like they should. I try to put this on as often as I can, and I use it along with cuticle oil at night. This cream does contain some things I probably wouldn't use on my face, such as glycerin and liquid paraffin, but for hands, it's ideal!

For less than a fiver, and frequently on offer, this is one product you should try if you suffer dry hands! :)
Posted by Lina-Elvira No comments: 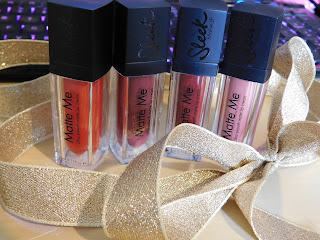 Yes indeed, as the Xmas gift sets starts rolling out into shops, I shall be bringing you the very best of the health and beauty gift sets which may actually get you some use beyond Xmas Day :) So no slippers and hot water bottle combos here...

This set from Sleek is available in Boots, and costs £5. You get 4 wearable mini versions of Sleek's popular Matte Me liquid lipstick. In terms of quality and wear time I rate these up there with the NYX Lip Lingerie, and the full size is £4.99 as opposed to £6.50 for the NYX. The arm swatches seem so streaky, I did these over twice to get rid of that but they don't play nice on my arm?? On my lips they didn't look patchy at all!

These are slightly sticky on the lips but I didn't find them drying. They do wear very well.  I found I had to use the Garnier bi-phase micellar water to remove the remains; once it's set, it stays. I even managed to eat chili con carne without too much damage!

In terms of colour, I think everyone can wear these with a bit of attitude! :) The light orangey red "Rioja Red" is super hot; boldly road testing this in the office attracted a lot of interest... Only for the brave and unabashed!! The plummy "Old Hollywood" is lovely if you like a vampy lip. "Birthday Suit" is a perfect everyday pinky nude which is already a staple in my handbag. And if you're into the Kardashian / 90s lips, go for "Velvet Slipper" (I hate that name..).

So for a fiver, I think this is a awesome stocking filler! :)

Posted by Lina-Elvira No comments: 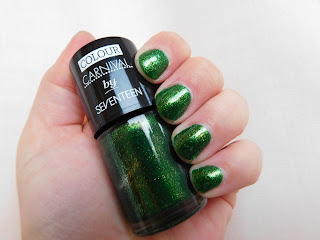 So this is probably one of my all-time fave nail polishes. And it's dirt cheap. So I of course have more than one bottle...

I think the naming of this one is wrong. It's descriptive, but I would have preferred something more evocative, such as "F*ckin' amazeballs green" or "So green I could die". Or, whatever.

This is 2 coats with Sally Hansen MegaShine top coat. Awesome. That's all I have to say. Got get one if you like green, they are £1.99 in Boots! :)
Posted by Lina-Elvira 1 comment: 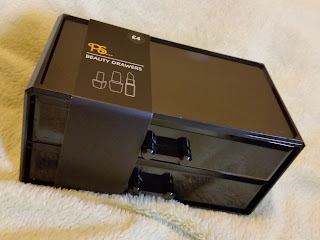 So I spotted these beauties in Primark last week! I already have a luxury larger version of these but in clear acrylic for my vanity, but with so much good makeup to choose from right now, I thought I would use these as secondary storage.

They come with the little cushioned net inside to stop things rolling about and the inside of the drawers measure 16.5x9 cm. I bought 4 of these and I am going to stack them on top of each other, secured together with some blutack. Hoping most of my overspill makeup will make it into these so I can 'shop my stash' more easily on a regular basis :)

These drawers are £4 each, but they also had some other versions like lipstick holders. As these are going on my desk, I bought the black to match the decor, but they also had clear acrylic versions.
Posted by Lina-Elvira 1 comment: